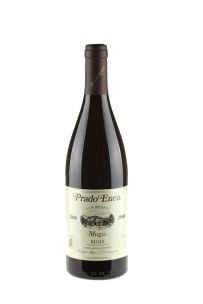 "The most classical of the wines from Muga, the 2011 Prado Enea Gran Reserva comes from a warm year that here was cooler than 2012, when they did not produce it. There won't be a 2013 either. So after this 2011, the following vintage will be 2014 but with fewer bottles and then 2015 and 2016. The wine has a developed nose with some tertiary notes, combined with some notes of ripe black fruit and sweet spices. It fees like an open, expressive and hedonistic year for Prado Enea. The palate reveals polished tannins and some balsamic and developed flavors, truffle, forest floor and hints of cigar ash and incense. Stylistically, this could be close to the 2006, which was also surprisingly fresh for the average ripeness found in Rioja in general. It was bottled in early 2015 after almost 40 months in barrel. Time in bottle has polished the wine, and it's ready to drink on release, but it's a wine that is going to develop in bottle for a long time.

Muga own close to 350 hectares of vineyards, as they think that even if you pay very high prices for grapes, you don't get the same quality as you get from your own vineyards. Some ten years ago, they had maybe 130 or 140 hectares of vineyards, and they are going to continue buying quality vineyards when they become available. So, they have increased their vineyards but production is stable. 2018 has been a variable vintage, with enough water and a tendency for high yields that they control, but they will probably produce Crianza/Reserva and perhaps Selección Especial, so no Torre Muga, Prado Enea or Aro. In 2017, they only produced their Crianza/Reserva. They are very happy with 2015 and 2016, even if they are different."