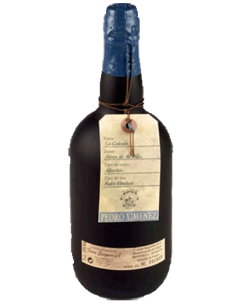 The Wine Advocate:
"he NV La Canada PX is sourced from a vineyard in the Moriles Mountains called Cerro de La Canada, ‘the canyon hill’ and undergoes oxidative aging in solera and is bottled at an average of 25 years old. It boasts the characteristics of a very old PX, incense, licorice, roasted coffee and the sweetness is nicely compensated by a bitter chocolate touch. What is surprising in such an old wine is the overall sensation of freshness and elegance of fruit, with balsamic flavors of dried herbs, flowers and camphor. A truly elegant sticky.

Perez Barquero was established in 1905 and still have some soleras from that time, the foundational soleras, from which very small quantities of extremely old and concentrated wines are withdrawn and bottled from time to time. In 1985 it was purchased by Rafael Cordoba who owns other three wineries in Montilla, Bodegas Gracia (from which I tasted one wine here), Vinicola del Sur and Tomas Garcia, and the four make up the Perez Barquero Group. They own 100 hectares of vineyards in some of the best locations in the appellation, in Sierra de Montilla and in Moriles Alto, planted with a majority of Pedro Ximenez, and control a further 400 hectares of vineyards belonging to other grape growers. With this they produce an impressive array of both dry and sweet wines (plus brandy and vinegar), whose main characteristic is balance, elegance and finesse. They stock 10,000 500- to 600-liter American oak barrels, the famous botas where they age their wines following the soleras and criaderas system. They produce an average of three million bottles of wine per year. Perez Barquero represents the quality summit of Montilla-Moriles. Their Finos usually have a lot number, whose first two digits seem to be the bottling year. All the Finos tasted had a lot starting with 13. The oldest wines, the ones labeled 1905, which is the year their soleras were created, were only bottled once in 2002, around 1,000 bottles of each, so the bottles should be decanted in advance to give the wines the chance to breath.."
Luis Gutierrez , Aug 2013.