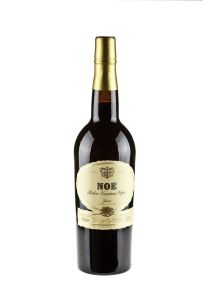 "The NV Noe Pedro Ximenez from sun-dried Pedro Ximenez grapes originates in the Nectar solera, and has a final average age of more than 30 years. The sugar level is 400 grams per liter. It has a different character and profile, more vinous than other PXs, it displays a volatile nose, with some minty, herbaceous and balsamic notes, intermixed with incense, ash and tar. The palate is extremely intense, velvety and round, with balanced sweetness, ending with a varnished note that lifts the wine up. Drink 2013-2019.

Gonzalez Byass is one of the greatest, historical names in Sherry (and Brandy), as well as the largest in Jerez, and the Tio Pepe brand and image one of the icons of Spain, and the best selling Fino in the world stored in an impressive solera of 30,000 botas. Moreover, it’s one of the few large Sherry companies still family-owned and managed. I had a very pleasant visit at their extensive facilities by Jerez Cathedral, visiting the different bodegas, tasting some wines from bota, discussing the developments for the en rama wines, the comeback of the pagos, while hearing about the history of the founders, the different buildings, and how things were many, many decades ago. It’s a fascinating visit offered to the public, in which thousands of visitors from all over the world (they mention 250,000 per year) learn the secrets of Sherry wine. I had the chance to sit down for a very relaxed conversation while sipping some very old wines at their library with winemaker Antonio Flores and vice-president Pedro Rebuelta Gonzalez, talking about wine in general, Sherry in particular, their company and a lot of other things. Gonzales-Byass was founded in Jerez in 1835 by 23-year-old entrepreneur Manuel Maria Gonzalez, who exported the first cask of Tio Pepe to London in 1844. Gonzalez was advised by an uncle of his, a man called Jose Angel de la Pena. Uncle Jose had a small bodega with his own solera of Fino, which had direct access to the street as he liked to come and go as he fancied. People called Jose are often nicknamed Pepe in Spain, so the solera of uncle Jose (tio means uncle), or uncle Pepe gave name to the famous Tio Pepe brand. The original bodega del Tio Pepe still exists, is in use today, and in fact holds some of the best botas of Tio Pepe Fino. Gonzalez took different partners, and the company changed names a number of times, like Manuel Maria Gonzalez & Cia or Gonzalez & Dubosc. In 1855, the year the people of Bordeaux were really busy making the classification of their chateaux, Gonzalez sold some company shares to his importers and distributors in the UK, Robert Blake Byass. The name of the company was definitely set to Gonzalez Byass & Co., which has been kept till the present day. Today the fifth generation of the Gonzalez family still own and manage the company. Through the years the company and its holdings have been greatly expanded, and the winery today is akin to a small town of 37 hectares, as it has incorporated some of the streets that connected the different bodegas, La Constancia, La Concha (a unique round bodega attributed to Gustav Eiffel), Los Apostoles, La Cuadrada, and the more recent Gran Bodega Tio Pepe, Las Copas or Marques de Bonanza. As a curiosity, if you visit their premises you’ll be able to see the largest working weathervane on earth, in the shape of a bottle of Tio Pepe!"

Exceptional wine produced with care and attention to detail: it comes from the Esteve vineyard, in the Upper-Jerez area, where it is set out in the open on esparto grass mats in the traditional manner. This process, known as soleo or raisining process of Pedro Ximénez grapes in the sun, together with a subsequent ageing for over 30 years give Noé an ebony colour with iodized hues.
It has a fig, plumy coffee-like and spiced bouquet. Fresh and silky to the palate.
It blends wonderfully with dark chocolate, vanilla ice cream and all kinds of sweet desserts. It is best served at room temperature or slightly chilled.
GonzalezByass.com