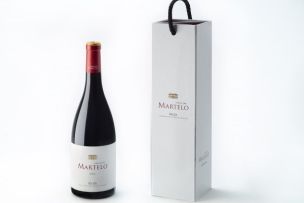 "The 2014 Martelo is produced with the grapes from their oldest vines, mostly Tempranillo, put through a cold soak after alcoholic fermentation then in barrique for a slow malolactic fermentation of 96 days. This was followed by an élevage in 80% American and 20% French oak barrels for two years, during which time it was racked four times. It has incredible aromatics with surprising notes of beef blood, iron and meat with tons of fruit, as Martelo is the vineyard where they find more fruit. This is a very elegant, aromatic and fine Rioja (they decided to bottle it in a Burgundy bottle) and it's not a coincidence, because that is what they are looking for. The palate follows the same path of finesse, balance and freshness.

Torre de Oña has been improving the wines since they purchased the winery in 1995, and they changed the style of the wines to a more traditional profile, blending the different plots and using American oak, until 2005. Since 2005 they have been vinifying by soil type, basically two or three (even if they have nearly 50 different soils), from the 49 hectares they have. From 2005 to 2011 they made two wines: the Torre de Oña made from higher altitude plots with more limestone and poorer soils that delivers more powerful, concentrated and tannic wines, and the Finca San Martín made from soils with less structure, which produce an easy-drinking Crianza style wine from Rioja Alavesa. But the plots that made up the blend of Torre de Oña were very heterogeneous, and they decided to create a new wine, Martelo. The portfolio now includes three wines, San Martín, Torre de Oña and Martelo, but Torre de Oña and Martelo will not be produced every year, only when they find the character they are looking for. In 2013 the two wines will not be produced. The 2014 Martelo was outstanding. And they tell me that with nearly 50 hectares of vineyards there might be more surprises in the future..."