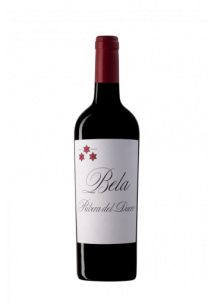 "They first produced this wine in 2017, but what I tasted was the 2019 Bela, made with grapes from their vineyard in Villalba de Duero, which produces powerful wines with a rustic touch. It's a large vineyard that they are learning to understand, looking at the differences in soil and doing a classification of the different plots, as there are two very different parts—one with more sand and more aromatic wines and the other one with more clay and richer, more structured wines. 2019 was a healthy harvest, warm and ripe, and the Tempranillo—complemented by some 5% Cabernet Sauvignon and Merlot—was picked between September 27th and October 17th. They did a cold soak and a fermentation in stainless steel with selected yeasts followed by nine months in French oak barrels. The label mentions the name of the village, and I was quite surprised by the finesse of this wine, which keeps the Ribera character, along with integrated oak and restraint. It is ripe without excess, serious and balanced. They aim for freshness, with some rusticity, and the palate reveals a soft texture and tender mouthfeel, with integrated acidity and round tannins. It feels like a very good start. 48,000 bottles produced. It was bottled in November 2020"

Rioja's CVNE is dipping its toes into Ribera del Duero with the creation of a new project, Bela, in the village of Villalba de Duero very close to Aranda de Duero in the province of Burgos. They had purchased the winery from Anta Banderas, a winery that had among its investors the actor Antonio Banderas. They kept the facilities and part of the vineyards and discarded all of the rest and renamed the project Bela, the nickname of Sofía Real de Asúa, who is the daughter of one of CVNE's founders, and the label is a remake of their Monopole label from early 20th century. They have 74 hectares of vineyards that belonged to the project and purchased nine more hectares in five plots of 25-year-old vines in the neighboring Moradillo de Roa from where they make their wine Arano. The goal is to make characterful wines with a fine style and with restraint rather than big international reds. They want to add a third wine when they find a vineyard, possibly in a different village.